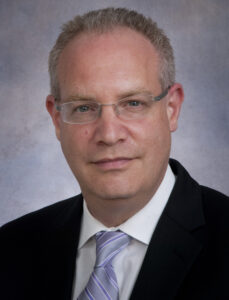 He received his medical degree from the University of Essen, Germany. After his postdoctoral fellowship at the Howard Hughes Medical Institute in the laboratory of Dr Kevin Campbell, he moved to Baltimore where he was the first combined resident in paediatrics and genetics at the Johns Hopkins University. He subsequently joined the faculty of the McKusick-Nathans Institute of Genetic Medicine at Johns Hopkins where he became the director of the world’s first multidisciplinary centre for Hypotonia, which has earned national and international recognition. He was also the director of the medical genetics residency programme at Johns Hopkins. In July 2013, the Hospital for Sick Children’s Centre for Genetic Medicine launched the Genome Clinic, focusing on genetics research and discovery.

He has been the Chief Scientific Advisor for the Duchenne Research Fund since the charity’s inception and, together with and Dr Kevin Campbell (Professor of Physiology and Biophysics at the University of Iowa), Professor Madeleine Durbeej-Hjalt (Professor and Vice Chair of the Department of Experimental Medical Science at Lund University, Sweden) and Dr James Dowling (Associate Professor, Departments of Paediatrics and Molecular Genetics, University of Toronto), advises the board of trustees on funding decisions. More recently, he has been representing the charity as the Scientific Advisory Board Member of Solid GT, a biotechnology company that was founded to advance gene therapy as a disease-modifying treatment for all Duchenne muscular dystrophy patients.